Just like you don’t just hop on your horse and decide to run in a barrel race the same applies to taking photos at a barrel race. You need practice runs and to be prepared. For me it is a little more complicated than the average photographer because I have to set up the live stream also. I have a lot of moving parts during a race day. 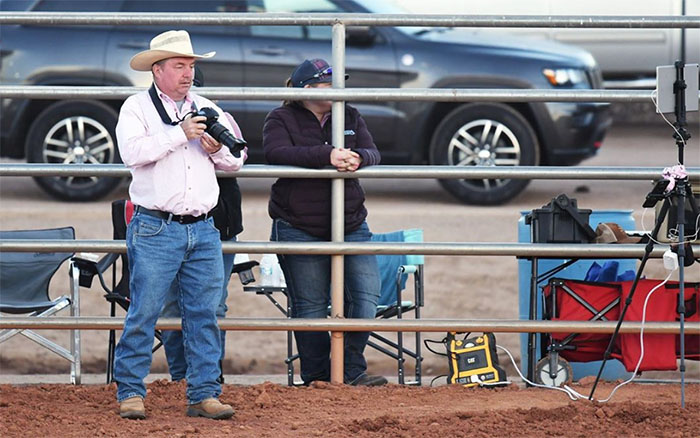 The number one thing I have to prepare for is power. Camera needs batteries, phones need to be charged, and live stream needs power. Doing live stream for hours at a time without plugging into an outlet because 99% of the time it isn’t available is a major task.

This method was adapted from one of my photography mentors Scott Kelby who shoots NFL games. He once shot a game and the game went into overtime and he had no batteries for his camera as they ran out when the game ended the 4th quarter. He now changes batteries at halftime so that can’t happen again.

For the live stream I have 3 or 4 portable power banks for the iPad that is powering the live stream. As you can imagine hours of broadcasting takes up a huge amount of power. I also have a portable battery charger that is used to jump start a car with me. Mine has a 120 volt plug and some usb plugs in it that I can use to either power my iPad if it is a big race with a lot of entries or if I want to recharge the power banks during the race. I also tell riders if they need to recharge their phone they can do it by me. This cost about $50 at Costco on sale. One of the best investments ever as I can also jump start riders if they can’t get their truck started after a race. You can see in the above picture it is actually powering the live feed with an extension cord. The extension cord I have is awesome because it has 2 spots for plugs and two spots for usb so I can power the iPad and charge things also.

Soon there will be a Southwest Barrels Recharge Station near me. Speaking of near me, for day races I usually set up a tent. I want to say it is for me but riders use it more than me. The original idea was to keep me from getting sunburnt but if I am in the arena I am not in the tent. Life is funny like that. I like nothing better than seeing riders and their families catching some shade and drinking a water from the cooler on a hot day. Heat exhaustion sucks!

For me Thursday is recharge battery day. It should happen right after I come home from a race but the focus then is used in getting the images to riders. I will charge the power banks as I am downloading images since I need to have them charged in case I need to go livestream another race asap. Dead power banks puts the live stream dead in the water.

On race day I try to treat it like a wedding. Pre- wedding- after. Sounds stupid but thats the way I look at it. I usually have to travel so I plan on how long it will take me to get to the arena, add a half hour for traffic and plan on getting there at the same time as the early time onlies start.

First thing I do when getting to the arena is make sure the race promoter knows I am there. I go talk to them and see if anything special is going on.

While the camera is ready as soon as I get there it usually takes 1/2 hour to set up the live feed. It usually takes longer as I am chatting with riders I know. I love this part of my job. I have met so many nice people during this time. What is strange is riders tell me they “Don’t want to bother me.” It is the complete opposite to me. I love hearing about their horses and what they are working on.

I once had a rider tell me they were having issues at 2nd barrel. I made sure I took double the amount of photos of that rider and she saw the problem and corrected it. If she didn’t come say Hi and what she was working on that may not have happened so quickly.

So as I am setting up the live feed I am also looking at what direction the sun is and where it is going to be. I always want the sun at my back. Of course this isn’t always going to happen. Not really a big deal as photoshop can fix anything. Night races and indoor races are another story. Doesn’t matter where I set up. I usually want to be someplace I can see the timer so I can snap a pic after the run.

This is done for a few reasons. One the riders love it when they can see the time after their run pics. Second it helps me sort the photos and tell who is who because I can go off the results sheet if I lose my place. Taking 10,000 photos a race will have its mix ups with riders in the redraw being moved and turnouts.

While I am up talking to the race promoter I am also trying to get a copy of the draw for the day. Of course this is a busy time for the promoters as riders are signing up for the race. If I can’t get one I will get it after the race. I usually share the predraw on the Southwest Barrels Facebook page a few days before and I save it to Evernote so I have some sort of copy while I am at the race.

Having this info helps, especially if I see someone is on 5-7 horses and spaced out or if someone is on a new horse. I will also see where in the draw the riders I usually video from my camera while I am taking photos are so I can be ready. I will also ask the riders if they have someone doing video for them. This way I can focus on photos if they do.

So it is almost time for the race to happen. My next things to focus on is restroom and snacks. Since I am in the arena for a few hours and basically trapped there unless there is a big drag I have to take care of business. Of course I always have a cooler with me with enough water for everyone at the race I have to make sure to pull some out and take in the arena with me. I always run out and love it when riders ask me if I need anything, it is usually a water because I can’t reach the cooler from inside the arena especially if I turn the cooler the wrong way to open out. (Yes that happens every week)

As you can see there is a lot of stuff happening and we haven't even started the race yet. Sometimes a rider will have a new horse and want pics during the time onlies. Since the horse is new to them or a baby horse they are training they may not actually enter the race with that horse. I am always happy to take photos. It is usually the first pics they have on that horse.