You are here: Home / How Did I Become a Barrel Racing Photographer 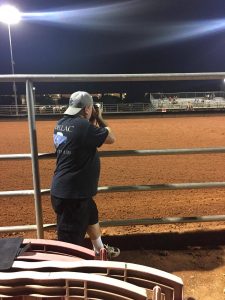 In 2012 we were living in NYC when Hurricane Sandy made that left hand turn and put 8 feet of water in our single story home.

We narrowly escaped to our neighbors second story with pets in tow where we watched our house sink.

Debbie’s daughter Liz was living in Queen Creek Arizona and since everyone needed a place to stay in NYC it was impossible to find a place so they came up with a plan to pack up the pets and whatever could fit in the rented suv that we got from the airport and head to Arizona where it was warm.

They got a place in Copper Basin and Deb and Liz made the place into a home while I stayed in NYC and tore apart the only place I had ever called home. I flew back and forth when we got some insurance money to rebuild and then it was back to Arizona.

After our lease was up we moved to Queen Creek where our friends Brian and Rachel had a house that he was renting.

One day while I was in Dunkin Donuts reading the paper I saw an ad for motor cross and since I took many photos of motorcycle shows back in NYC I decided to check it out.

As I was leaving there was a sign for barrel races being held the next night. I had no idea what it was. Being from NYC I thought it was guys racing while carrrying a barrel of beer.

So I go to the races and one of the very first peewee or youth that started off the night did like 18 second run. It was more of the horse took off on her but she didn’t look out of control to me.

She was smiling all the way around the barrels. Luckily everything worked out ok but I was hooked. The size of the rider and the speed of the horse got me hooked.

I went back the next week and took some photographs. Showed a few people were they could find them on Facebook and the rest is history.

After a few years up in Queen Creek Deb and I decided to move down near Tucson and I started taking photos of the barrel races down there.